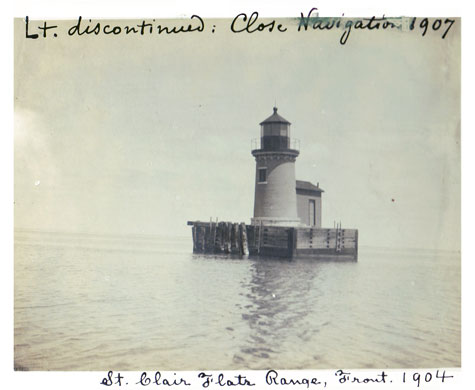 Lake St. Clair has two lighthouse structures built before Abraham Lincoln was President of the United States. They still stand today just off the southeastern tip of Harsen’s Island. Construction of the Old South Channel Range Lights started in 1855 and finished in 1859. These lights guided ships into the fresh water delta once known as the Venice of America.

The front light began to lean in 1875 and was dismantled and rebuilt on the same stone and timber crib that it had been built on originally. It remained but is again leaning and in very bad condition from erosion of the base. In 1990, we placed a steel cell around the base, reinforced and filled it with limestone for temporary support until a permanent seawall cold be built. In the fall of 1996, a permanent seawall was completed around the front light island.

The rear light was built on the same type of crib but has weathered the elements over the years. There was a large keeper’s house on the island surrounding the light that was taken down in the early 1930s. Vandalism has played a part in the overall deterioration and, combined with age and the elements, the rear light is also in need of major foundation work.

If this maritime heritage on Lake St. Clair is to be saved, restoration efforts must continue. Save Our South Channel Lights is an all-volunteer, non profit organization that was formed to accomplish this. The lights have been placed on the National Register of Historic Places. With your help, we will pursue our efforts to preserve these remarkable pieces of Lake St. Clair history

Support and Save Our South Channel Lights

What’s in a Name

ONLY ONE STEP LEFT